Can AI and Cognitive Science still live together happily ever after?

The research in Artificial Intelligence has been based, from a historical standpoint, on a strong collaboration between computer scientists, psychologists, engineers, philosophers and biologists working in the Cognitive Science field. This collaboration, fostered by the influence of the cybernetic approach to the study of natural and artificial systems, has produced – along the years – the development of fruitful research lines in bionics, robotics, biologically and neurally inspired systems and, more in general, in the area of cognitive artificial systems and systems science.

After decades of mutual and pioneering collaborations, however, Artificial Intelligence and Cognitive Science have produced several sub-disciplines, each with its own goals, methods and criteria for evaluation. This fragmentation, on one hand, has facilitated the development of some AI systems able to produce super-human competences, but only in very restricted domains (such as in theorem proving, or in games such as chess, Jeopardy, Go etc.). On the other hand, however, it has been based on a divide et impera approach that has significantly inhibited the cross-field collaborations and the scientific efforts aimed at investigating a more general picture of what natural and artificial intelligence are, and how intelligent artefacts can be designed by taking into account the insights coming from the natural world. In more recent years, however, the area of cognitively inspired artificial systems has attracted a renewed attention both from academia and industry and the awareness about the need for additional research in this interdisciplinary field has gained widespread acceptance. The gap between natural and artificial intelligence, in fact, is nowadays still enormous and the research in this area seems now crucial for the development of artificial systems endowed with human-level intelligence in a general setting. 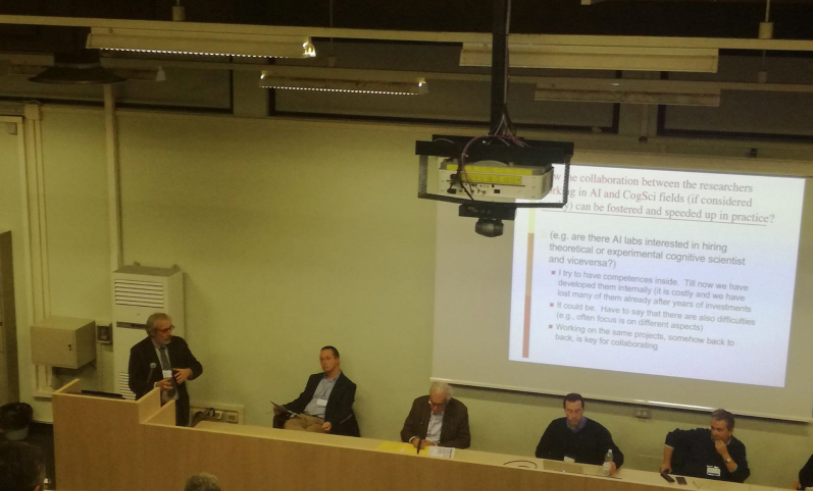 Photos taken during the conference are on-line